Kuchipudi dance form is named after a small and obscure village in Andhra Pradesh, called Kuchipudi. Historically speaking, it is an art form practiced by men of a few traditional families and is about five centuries old. It was in the medieval times that the form flourished and received both royal and popular patronage. With the passage of time and under the onslaught of new and modern forms of popular entertainment, Kuchipudi dance lost its preeminence and was reduced to an entertainment performed on festive occasions. The weight of the tradition took away its finer aspects and reduced to a mere shadow of its original. 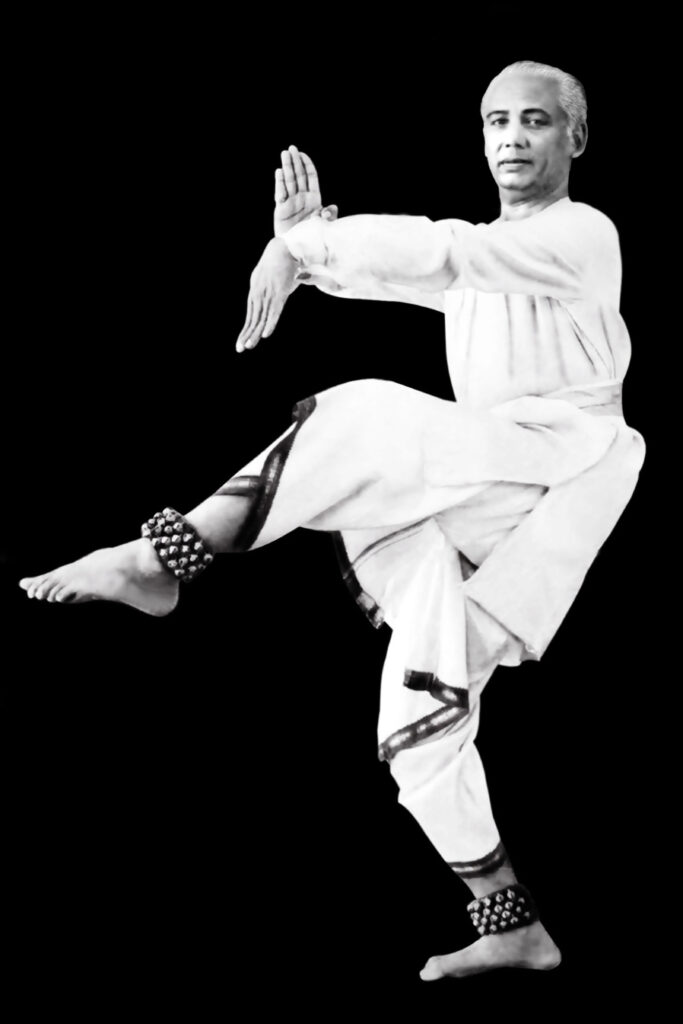 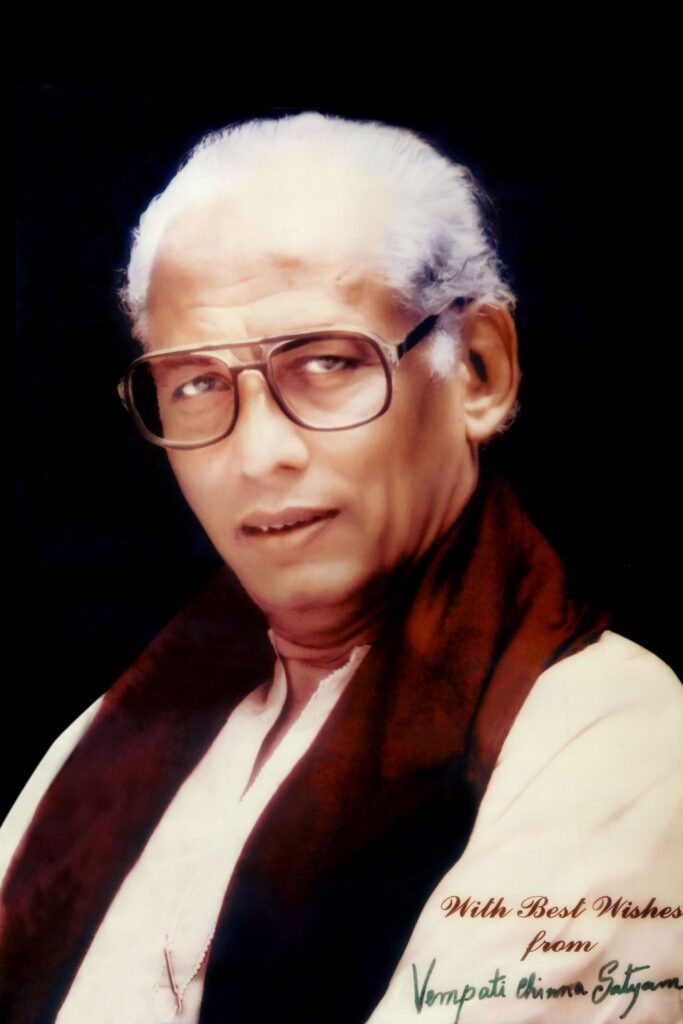 Kuchipudi dance form is named after a small and obscure village in Andhra Pradesh, called Kuchipudi. Historically speaking, it is an art form practiced by men of a few traditional families and is about five centuries old. It was in the medieval times that the form flourished and received both royal and popular patronage. With the passage of time and under the onslaught of new and modern forms of popular entertainment, Kuchipudi dance lost its preeminence and was reduced to an entertainment performed on festive occasions. The weight of the tradition took away its finer aspects and reduced to a mere shadow of its original.

Born (1929) during the refulgence of nationalist fervor, when the traditional art forms of India were revived and brought again to the main stream of the national art scenario, Guru Vempati Chinna Satyam breathed a new life into the form. Guru Vempati belongs to a pedigree of 9th generation of the traditional Kuchipudi parampara. A child of Varalakshmamma and Chalamayya, Vempati had the earlier training under the tutelage of Tadepally Perayya and Pasumarti Kondalarayudu. What sharpened his earlier talent and molded him into a prospective Natyacharya was the finer and more subtler nuances he learnt under the able guidance of one of the well known celebrities of Kuchipudi dance, Vedantam Lakshminarayana Sastry. As a performing artiste his contribution was though not of a very great significance, he did display his talent as a budding artiste in the roles such as Satyabhama and Shiva.

The defining moment in the life of Vempati came when he decided to leave the cloistered world of his village and literally trekked the long distance to the metropolis of south India, Madras (Chennai). What was described as a journey in search of bare necessities of life turned out to be a Mahaprasthana, in the evolution of Kuchipudi art. To begin with he had a brush with choreographing for the commercial cinematic entertainment, which provided him the necessary physical sustenance. However, his inner yearning for the aesthetic aspects of the Kuchipudi form did not perish. On the other hand, the tinsel world glitter and glamour and the trappings of wealth somehow did not satiate the artistic thirst that was latent in the blood of this young lad of Kuchipudi village.

Numerous are the names of the later day leading danseuses that received training at the feet of this great guru. Even these leading and commercially well known artistes clamoring for his training did not make Guru Vempati happy and contented. A center to train the young aspirants in the Kuchipudi style, he thought, would be the first step in the rejuvenation of the staggering art, which he, along with the blessings of the art elite of the city of Madras was started in 1963. The Kuchipudi Art Academy now became not merely the nucleus of the dance activity in the city but the focus of the guru, an instrument through which he could realize his silent urges and cherished dream to place a relatively unknown and obscure form in the firmament of the world of dance. One should probe a little into the inner recesses of this guru’s mind to see the transformation a dance style of a small region, relatively unnoticed and unrecognized has merited a respectable place in the Hall of world dances.

What is the contribution of Guru Vempati and what legacy he would leave behind in the area of Kuchipudi dance. It is not an easy task to answer this question in a few words. To borrow the cardinal principal of Indian culture, “continuity and change” is the summon bonum which guides the work of this great savant. What ever critics might say, Guru Vempati remained truthful to the basics of the treatise of dance Natyasastra which he swears by and says that this ancient scientific work should guide any form of dance. But this is not the end of the story. Infact, the necessary changes and adaptations he brought into the form keeping in mind the changing times and conditions of the society will remain the singular and unique contribution of Vempati. To understand the concept of change not only in life but in living art forms is the major step that made Guru Vempati and his style different from that of the other exponents of Kuchipudi. Once this significant transformation took place, he began creating primarily the traditional themes giving them a new dimension and shape. Instances are many in this direction and to mention only a few, Sri Krishna parijatam, Sakuntalam, Padmavati Srinivasam and Haravilasam. One notable deviation from the traditional themes, which received wide acclaim from both the learned and the laity, was the noble laureate Tagore’s Chandalika. Vempati, infact, did not pursue this path of producing unorthodox and socially relevant productions for reasons best known to himself.

If one asks the question that what makes his each production a masterpiece of high caliber bearing a new stamp, the answer lies in the gurus penchant for fresh and new ideas and techniques. Observed from close quarters, he is seen always not satisfying himself with what he has done and looking for newer and off the track ideas to put into his production. One does not know whether this is prompted by his training or springs out of the creative genius that lay in this great master. The meticulous, long and rigorous training that precedes each production is really unheard of in the annals of Kuchipudi tradition. His uncompromising attitude and self-satisfying mentality surprised many a connoisseur as he does it always either for a solo item or for a larger dance drama production. The impact of this singular trait can be seen today in al his disciples who continue to perform and spread the form in India and all over the world.

Vempati is not a mere phenomenon in the world of dance but as a person endowed with noble human qualities is perhaps the unparallel. His love for his disciples, commitment for his art and single-minded devotion to his calling made him what he is today. What will be his legacy? We are too close to this great legend who still is with us in flesh and blood to assess his contribution to posterity. However one may hazard to make a guess. To call him a second Siddhendra Yogi, may be to elevate him to the status of divinity. Also on the sands of time there cannot be the footprints of two Siddhendra Yogis. And also it may sound eulogistic and hagiographic. But undoubtedly he is an epoch maker who transformed a local and regional dance form into a universal art form. And Vempati will be like one will be born once in a millennium – ‘Na bhutoo na bhavishyati’